The View From Here

Hi, I'm Carl Tannenbaum, Chief Economist for Northern Trust. We're recording this video from Chicago, home to Northern Trust now for 130 years. It's also my lifelong home, and that is-- well, it's a lot of years. And through the years, Chicago has been a talisman for the US economy, and generally a good one-- first, as a center of agriculture, manufacturing, and transportation, and more recently as a center of health care, finance, and entrepreneurship.

It remains a hub of economic development for the country and for the world, but Chicago and the state of Illinois are emblematic of another economic development that is less pleasant. The city and the state are grappling with acute financial challenges that we see in a number of other places. Cities and states employ thousands of public employees-- teachers, firemen, policemen, and others. These civil servants don't earn the highest salaries, and raises are sometimes modest so that budgets can be kept in balance.

But to improve their compensation, local governments have promised generous retirement and health benefits, the bill for which is now coming due. In particular, pension systems nationwide are under extreme stress. It would have been best to solve these long term fiscal problems long ago, but we can't go back in time. And as we look forward, benefit changes and tax increases are the only way back to solvency.

Everyone is going to have to give a little, even though it will be unpleasant. No one likes tax increases, but uncertainty over tax increases makes it hard for citizens and businesses to plan for the future. If the uncertainty drives people and firms away, then the challenges faced by local economies become even more difficult.

I've traveled a lot over the years and seen some amazing places, but I love Chicago, and I really can't imagine making my home anywhere else. For the city's sake, and the sake of other communities in America, I hope that our legislators come up with reasonable solutions to the fiscal problems we face. The time is now, and that's the view from here. 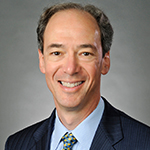