2019 turned out to be a fantastic year for risk takers, and even for those heavily invested in bonds. The regularly touted impending recession once again failed to materialize, and the U.S. Federal Reserve moved from tightening policy to cutting rates and growing its balance sheet once again. The bond market was signaling last summer that monetary policy was too tight (as the yield curve inversion in the chart below illustrates), and the Fed’s resulting pivot has led to a steepening of the curve that indicates investors’ increased confidence in the economic outlook. It is also a result of investors increasingly seeking inflation protection, including through purchasing inflation-protected securities (see Interest Rate section). We think this concern is premature. Global inflation measures remain restrained, and U.S. average hourly earnings gains slowed in December to just 2.9% despite an official unemployment rate of 3.5%.

Our base case outlook now includes a theme, Structural Monetary Accommodation, that captures our view that global central banks will tolerate inflation above their 2% target levels since it has run well below for so long. But monetary policy alone will not reignite inflation; low interest rates haven’t materially boosted aggregate demand and technology will continue to bolster supply in many parts of the economy. So the primary outcome of the structural accommodation will be continued low interest rates and support for current risk asset valuations. We predict the potential fiscal stimulus in Europe will not be sufficient to offset the slowing fiscal thrust in the U.S., and as a result do not expect organic economic growth to accelerate meaningfully.

Geopolitical risks remain front and center, but have mostly settled down over the last year. The U.S. and China are reportedly set to sign the “Phase 1” trade deal in mid-January, and the U.K. looks set to exit the European Union at the end of the month. Increased tension between Iran and the U.S., including the killing of General Qasem Soleimani and the subsequent bombing of U.S. military facilities, hasn’t sustainably increased oil prices nor risk premiums. The stage was set for 2019’s strong returns by the significant sell-off in the fourth quarter of 2018. Similarly, the strong returns of 2019 reduce the magnitude of potential gains in risk assets this year. So while we have more tempered expectations across most markets, we think the outlook for risk-taking remains constructive. In this environment, our favored asset classes remain U.S. equities, high-yield bonds, and global real estate and global listed infrastructure. Please refer to our 2020 Outlook piece, “Everything in Moderation,” for further details on our expectations for financial markets this year.

Interest rates fell for most of 2019, forcing the Fed to cut rates three times. The 10-year Treasury yield bottomed out at 1.45% before ending the year at 1.92%. This took the yield curve out of inversion, ending the year with 0.35% of steepness. This steepness was driven by reduced geopolitical tensions between the U.S. and China as well as stabilized global economic growth. Also helping to steepen the yield curve were signs from the Fed that rates would remain on hold throughout 2020, even should inflation move higher and above their 2% target.

With the Fed entertaining the idea of letting inflation run above its 2% target, interest in U.S. inflation-linked bonds has climbed. Large investment firms and fund managers have increased allocations to Treasury Inflation-Protected Securities (TIPS) vehicles, reflecting the growing desire for instruments that are indexed to inflation to provide a hedge should inflation take hold. Since August of 2019, there has been $2.3 billion of inflows into eight of the largest TIPS Exchange-Traded Funds (ETFs), which total $43.8 billion of assets. We remain skeptical. While the Fed is willing to allow inflation to run hot, many structural forces are keeping inflation under control. We remain underweight inflation-linked bonds in our global policy model. 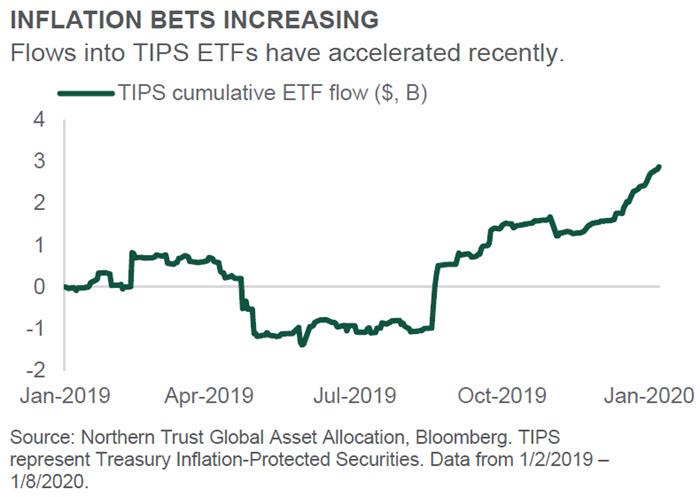 A global rates rally and spread tightening drove the strong high-yield returns of 2019. Higher-quality securities led returns as macroeconomic concerns dominated the year until abating in the 4th quarter. While energy defaults drove the default rate higher, hampering returns, other sectors saw low default activity and double-digit returns. Significant inflows and a lack of net new supply also supported returns. In search of higher yields, global investors poured $26 billion into the asset class. High-yield supply increased by 56% from a depressed level in 2018, but refinancing activity also increased to its highest level in the past five years (see chart), reducing the net impact.

The low-rate environment incentivized management teams to refinance outstanding issues at a lower cost of debt. The reduction in rates allows issuers to access the capital market, improving corporate balance sheets through reduced interest expense and reducing the maturity wall to be financed by the high-yield market. Against a backdrop of lower expectations for new issuance and prospects for stable monetary policy and corporate fundamentals, there is evidence to support a constructive stance toward highyield valuations in the year ahead. 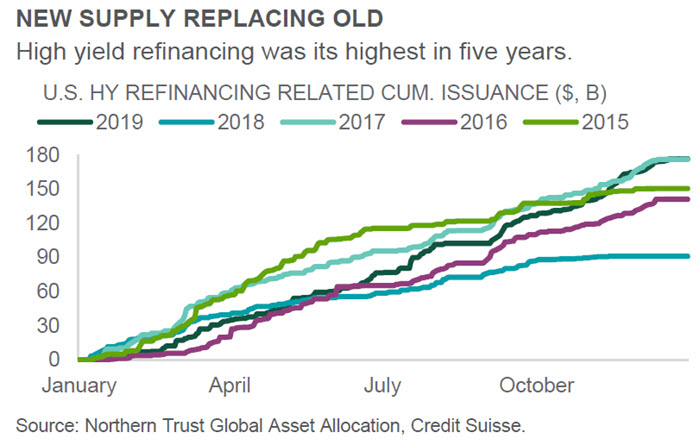 Global equities finished the year strong, adding to already impressive gains. Driven by increased optimism regarding U.S.-China relations due to the announcement of a “Phase 1” trade agreement, emerging markets (EM) led the pack for the month. U.S. markets significantly outperformed in 2019, but given comparatively better earnings performance (flat in the U.S. vs. down elsewhere), the valuation premium of U.S. equities relative to the rest of the world remained largely unchanged.

Valuations increased materially in 2019. U.S. markets trade at a notable premium to non-U.S. markets, and may at first glance indicate that U.S. equities are relatively expensive. However, if we correct for higher historical valuation multiples (see chart), sector weight differences and profit margins, the valuation gap is narrower than indicated. Even more, in the absence of a recession and/or a pronounced rise in inflation (enabling continued accommodative global monetary policy), we expect valuation multiples to remain stable. That means earnings growth and dividends will likely be the main drivers of equity returns, giving us high single-digit return expectations across the globe.

Oil markets don’t impact the economy or global equity markets like they used to. It’s not that we don’t continue to have oil price shocks. We do. In fact, we have had three geopolitically induced oil price spikes in the last 12 months. The first was Iranian aggression (attacks on oil tankers and a U.S. drone shot down in response to oil sanctions) in June. The second was the strike on a Saudi oil facility that temporarily took 5% of global oil production offline. Finally, there was the assassination of Iranian Major General Qasem Soleimani. However, these price shocks: 1) proved to be short-lived (given a more diversified global oil supply) and; 2) have had little impact on global equity markets. The chart shows the price changes of oil and global equities during the oil price shock and over the ensuing 30 days. Oil prices have generally retreated notably after the initial surge, while global equity prices are barely bothered at all.

Driven by an expectation for continued slow economic growth and supported by reduced sensitivity to geopolitical events, we have maintained our slight underweight to natural resources. Instead, we prefer global real estate and listed infrastructure in order to take advantage of what we expect to be an extended period of low interest rates. 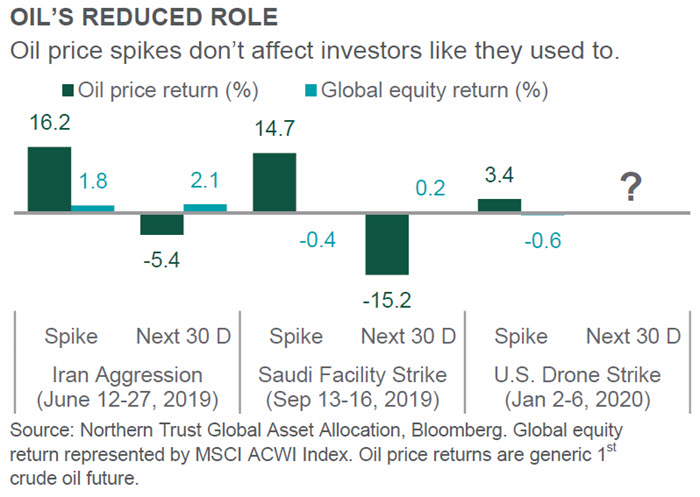 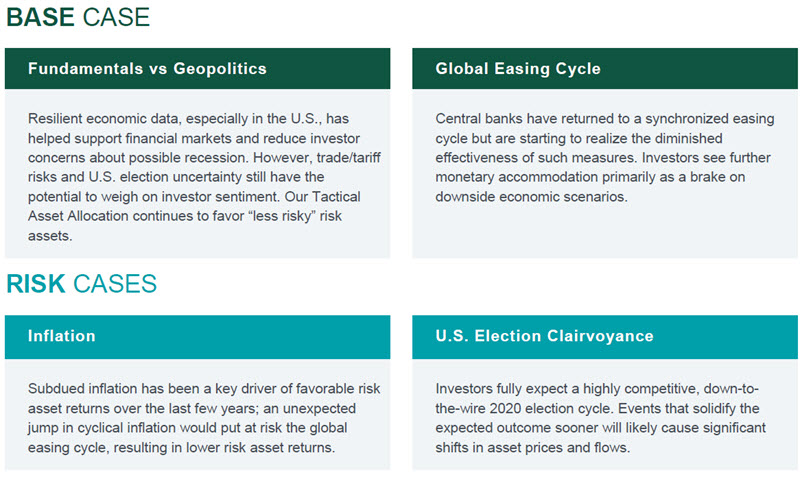 
IN EMEA AND APAC, THIS PUBLICATION IS NOT INTENDED FOR RETAIL CLIENTS

The information contained herein is intended for use with current or prospective clients of Northern Trust Investments, Inc. The information is not intended for distribution or use by any person in any jurisdiction where such distribution would be contrary to local law or regulation. This information is obtained from sources believed to be reliable, and its accuracy and completeness are not guaranteed. Information does not constitute a recommendation of any investment strategy, is not intended as investment advice and does not take into account all the circumstances of each investor. Forward-looking statements and assumptions are Northern Trust's current estimates or expectations of future events or future results based upon proprietary research and should not be construed as an estimate or promise of results that a portfolio may achieve. Actual results could differ materially from the results indicated by this information. Investments can go down as well as up.